Circulation and Pandemic Threats Throughout History 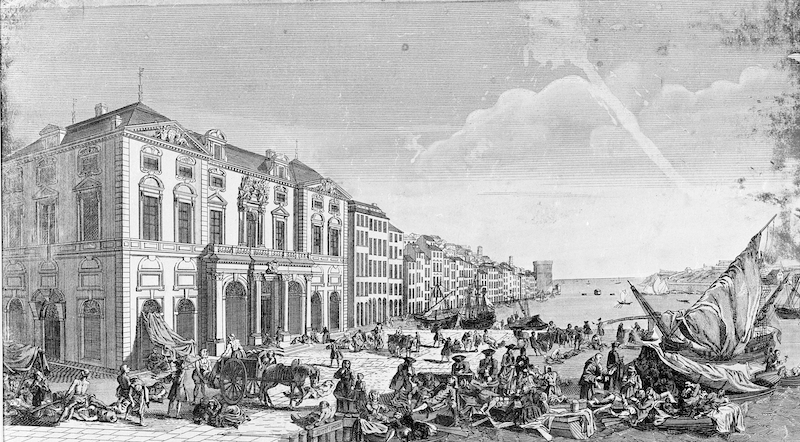 The port of Marseille during the plague in 1720. Coloured etching after M. Serre. Credit: Wellcome Collection. Attribution 4.0 International (CC BY 4.0)

Contagion is a podcast series on circulation and pandemic threats throughout history jointly promoted by Cromohs and the Cost Action CA18140 ‘People in Motion: Entangled Histories of Displacement across the Mediterranean (1492’1923)’, or PIMo

The Covid-19 pandemic crisis forced all of us to re-organize our scientific activity. It impacts our social and academic life. It also invited historians and social scientists to share their work, to publicize their multiple insights on the current crisis, and to look at it into the light of different historical experiences. Contagion askes how individuals, groups, societies and states reacted to pandemics. Doing so it explores the economic, social, political, and cultural dimensions of pandemics as well as their impact on the evolution of societies. It is equally a matter of better understanding how the pandemic risk has been assessed, managed, and anticipated in ordinary times by communities and public actors.

Pandemics must be seen as an integral part of global history. Viruses are proteins; they do not circulate per se but are carried by living beings, both humans and animals. The spread of a virus can be considered a risk associated with all forms of circulation. It is up to each society to be aware of this and to assess this risk according to its own expectations. The history of a pandemic is therefore linked to the history of trade, navigation, colonization and travel, but also to the history of science and the constitution and dissemination of knowledge. In the 16th century, the introduction of smallpox in the Caribbean and then in the Americas by European sailors, soldiers and missionaries led to the extinction of 90% of the native populations; they had not developed antibodies to a disease they had never encountered. The crew of Christopher Columbus, on the other hand, brought syphilis back to the Mediterranean, and the wars in Italy then spread it throughout Europe.

Epidemics and pandemics can indeed be the result of wars. The virus can still be a biological weapon. In 1346, the Mongols of the Golden Horde catapulted contaminated bodies over the walls of the Genoese colony of Caffà, whose merchants brought the ‘Black Death’ to Europe. A virus spread all the more easily as the organisms were weakened. 17th-century European Catholic societies associated the plague with famine and war in their prayers. The first Sino-Japanese war of 1894 increased the risk of the spread of the plague first contained in China, which very quickly affected the entire Asian Pacific coast as well as India. And the ‘Spanish flu’ of 1918 could be considered intrinsically linked to war because of the weakened societies and the circulation of soldiers, in and through which it was spread. The spread of ebola in the province of North Kivu in 2019 was another obvious evidence of the close and complex link between an infectious disease and a war that has been going on since 2004.

Societies could respond to pandemics in radically different ways, generate a variety of emotions. In the 16th-century Aztec Empire as in the 17th-century the Holy Roman Empire, an eschatology developed with the effects of diseases that significantly amplified respectively the deaths of the Spanish conquest and the Thirty Years War.  The diary of Sam Pepys is an exceptional source on the perception of the effects of the ‘Great Plague’ in 1665 London. Pepys, like the rest of the gentry, perceived the plague as an urban threat. As the first districts were quarantined, he described the departure of London’s elite to the countryside, spreading the disease even further. He himself sent his mother and wife to Woolwich but stayed in town to ensure the supply of London. He staged his indifference in front of the bodies piling up in the streets and a sort of acceptance of the banality of death. The summer heatwave seemed to him heavier than the plague. Medicine and society could also clash in the interpretation of the necessary measures to be taken during a time of crisis. While during the ‘Black death’ in Granada, Ibn Katima introduced a first typology of plagues, explained how they spread, and recommended social distancing, in Florence Giovanni Boccaccio denounced the selfishness of his contemporaries who turned away from the sick and left them to die alone, rather than accompanying them if not trying to cure them. Pandemics can indeed generate stigmatization and social marginalization of infected people and, like the AIDS epidemics of the 1980s and 1990s, this stigmatization can be more devastating than the disease itself.

Despite their global dimension, pandemics were also part of the history of states and state-building. ‘Exclusion’ and ‘surveillance’ were according to Michel Foucault the two pillars of biopolitics. It is certainly no coincidence that Thomas Hobbes, the theorist of the social contract in England, was also the translator of Thucydides’ The Plague in Athens. The biological protection of the social body becomes an imperative for the State, whose legitimacy rested on the existence of this body. Bad policy led in Athens to the death of the state itself, embodied here by that of Pericles and the numerous religious desecrations. Then epidemics and pandemics were occasions for the development of the institutions through which the State informed itself and imposed social control over the governed populations. Closing borders, restricting freedom of movement and expression, distrust of foreigners and the temporary or permanent exclusion from society of certain groups identified as vulnerable, are measures specific to biopolitics. In this sense, infectious diseases also constitute a risk for today democracies.

It is all of these themes that Contagion proposes to tackle with the participation of historians from different periods and disciplines working throughout the world.

For any further information on the COST Action PIMo, including opportunities to be involved, we invite interested scholars to contact Giovanni Tarantino, Chair of the Action and Scientific Coordinator of the Contagion series (giovanni.tarantino@unifi.it)