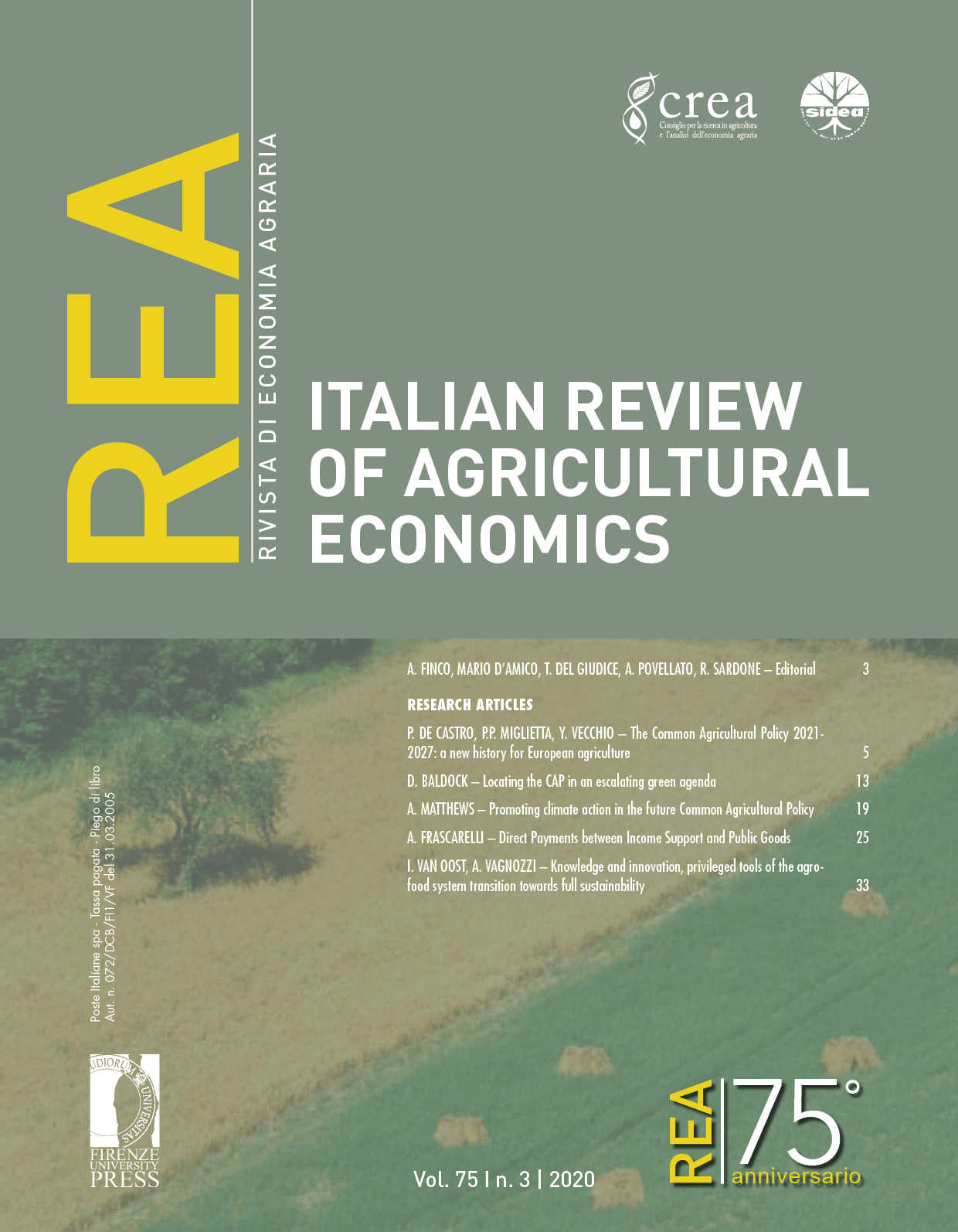 Nowadays, change is one of the most characterizing elements of the primary sector. An evolutionary process has occurred in the last decades that has contributed to reshape the functions and roles of agriculture. It is not the first time that the Italian Review of Agricultural Economics (REA) raises the question of the impacts of these changes on the economic, environmental and social aspects of rural areas. Since its establishment 75 years ago, REA has published studies that analyse and debate on the outcomes of these changes that liven up rural areas. In recent years, the primary role of agriculture has been acknowledged by researchers and policy makers, being key for assuring food for the growing population in a globalized food system, where socio-political forces should be balanced.

The supply of food should satisfy the growing global demand in a way that is sustainable and driven by ethical values, moreover, linked to the management of waste, the protection of human rights, the search for circular models of production. The increasing role that agriculture must play in the management of the rural areas is to be added, at the same time, to this new and traditional functions.

An innovative vision of agricultural activity in planning and territorial protection is needed to face some important phenomena with global relevance, such as climate change, the management of fragile and internal territorial areas, the growing presence of agriculture in urban and peri-urban areas, the abandonment of agricultural land even in lowland areas, woody encroachment into abandoned land, to cite a few. That vision should endorse the social and cultural dimension of agriculture that has shaped rurality and society in most European countryside.

The European model of agriculture is characterized by positive externalities that create a unique, though fragile, multifunctionality. Despite its weaknesses, this model could be able to satisfy the needs of farmers, consumers and the society as a whole. In this context, the Covid-19 pandemic is a further element of change which has modified, in a more or less structural way, consumption habits, the organization of local, national and international supply chains, the perception of rurality by the society, the innovation needs of all the actors involved in the food system. Such a scenario sets new and difficult challenges to the primary sector. To address those challenges, agriculture and rurality should undergo a «transition» process, to be ableto guarantee food security and social justice. To that purpose, targeted and innovative public and private interventions are needed.

This is the complex and articulated scenario in which the new European agricultural policy for the period 2021-2027 is developing. The scope and depth of discussions relating to the next programming period are not different from those that other Common Agricultural Policy (CAP) reforms have animated. Besides, following an approach that could be defined as incremental, the new CAP is increasingly having to deal with the new and ambitious objectives that the European Union is setting with the Green Deal strategy in response to the challenges of a changing world economy and the risks associated with climate change. These challenges are also visible from the point of view of the agricultural economists. For each new European program, since 1962, the Italian Review of Agricultural Economics has been the place of election for the development and sharing of the debate between Italian and foreign researchers and policy makers. Also for the CAP 2021-2027, the Review has been faithful to its mandate and, thanks to the collaboration of the authors of the articles contained in this issue, which celebrates the 75th anniversary of its foundation, has tried to offer to the readers a broad picture of the peculiarities, challenges and tools that will characterize agricultural policies over the next six years.

The article by De Castro, Miglietta and Vecchio focuses attention on how the new CAP should support the competitiveness, sustainability and resilience of farming systems. The new CAP reform should also be based on a new model of CAP governance that is more focused on performance improvement, independent decision-making and increased responsibility by Member States.

Baldock’s article discusses how the CAP has chosen a much more moderate approach to environmental protection in comparison with the ambitions placed with the new vision of economic development of the Green Deal. The strategies to reconcile these not completely convergent positions are presented and discussed in the article.

In this changing programming approach, Frascarelli’s article analyses the role of the First Pillar of the CAP and its more traditional intervention tool: the direct payments. This Pillar still have a fundamental role in the future programming period, also given the relevance of the allocated share onthe CAP budget. Direct payments will aim at enhancing income support and fostering the provision of environmental public goods, thereby turning into a more strategic tool, compared to the current CAP framework. The environmental challenge closely linked to the goal of mitigation of climate change is a key element of the new CAP. Over the years, the strategies followed to reinforce the objectives described have been diversified as have been the variously courageous choices that the single Member States have made in line with the requirements of the European Commission.

Matthews’ work analyses the environmental issue, highlighting different elements of the proposed green architecture in the future CAP and their implications for agriculture and land use. The article identifies the opportunities presented by the new CAP to reduce agricultural emissions, while increasing the removals in land use, land use change and forestry (LULUCF). The challenge, therefore, concerns the National Strategic Plans and the indications that the single Member States will give for reaching objectives such as net-zero emissions by 2050 or to contribute to climate change mitigation and adaptation.

Theabove mentioned «transition» is a difficult task for the agricultural and rural sector. In particular, the characterizing element of the new CAP is the need for a deep change in the processes, in the entrepreneurial culture and in the organization of the involved stakeholders, with the aim of increasing the resilience of such a complex system. This might seem self-contradictory, but it must be underlined that the new CAP identifies knowledge as the common denominator of change and resilience. This strategic and immaterial dimension is the focus of the article by Van Oost and Vagnozzi. Authors emphasise that the knowledge and innovation in the new programming phase must assume the form of intangible capital, developed by the Agricultural Knowledge and Innovation System (AKIS). AKIS actors (farmers, researchers and advisors, together with the other actors) should closely cooperate to support the transition process of the agricultural sector and to generate tailored innovation via specific research projects. The article shows the achievements of the current CAP for fostering actors’ interaction and describes how those achievements would be exploited and improved by the CAP post2020.

In the near future, agriculture and the rural ar-eas will certainly have to face several challenges. This issue of the Italian Review of Agricultural Economics is focused on to the emerging debate about these challenges, which are the core interests of the journal. Thus, the Italian Review of Agricultural Economics celebrates the milestone of its 75th anniversary fully respecting the spirit of its founders.

We are grateful to the distinguished Authors, representing the academic and institutional world, for having contributed to this third issue of 2020. This has been a year characterised by unexpected events and difficulties, which have deeply influenced global growth perspectives, also by changing the relationships between sectors and actors inside the economy and by generating specific criticisms in the agricultural sector. Despite these difficulties, agriculture has shown its central and strategic role for the society and has demonstrated to be able to recover and to face relevant and complex challenges.