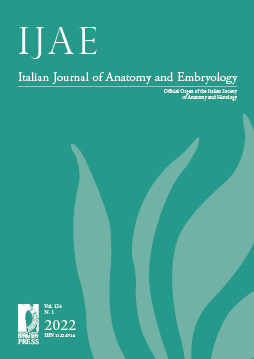 It is our distinguished pleasure to introduce this special monographic issue of the Italian Journal of Anatomy and Embryology dedicated to the topics of the history of the anatomical sciences and the morphological bases of palaeopathological studies. These two branches of human anatomy, though deemed interesting and relevant to the field by a large number of scholars worldwide, are too often neglected or not developed into a self-standing, productive field of research and teaching, especially in Italy. This is particularly sad and detrimental if one considers that human anatomy was reborn in Italy after centuries of intellectual stagnation first at Bologna thanks to the teaching of the Mediaeval scholar Mondino de’ Liuzzi and later, during the Renaissance, owing to the interest showed by artists in the correct representation of human morphology and bodily proportions.

This shows how rediscovering the discipline’s history inevitably leads its students to the realisation of the existence of an interplay between the figurative arts and the study of the human body, a bond which until the late 19th century was perceived as evident, self-explanatory and indissoluble. Moreover, it was precisely in that century that, from the anatomical discipline and its sub-branch osteology, stemmed biological anthropology, a subject which, now greatly enriched by biomolecular studies and by the assessment of mummified human remains, can help us discover the antiquity of humankind, its evolution as much as that of the diseases that characterised its historical path, a field traditionally called “palaeopathology”.

In this collection of contributions encompassing all of the aforementioned areas of research and anatomical knowledge, we aim to stimulate our colleagues and students to rediscover the importance of these topics and to develop them into a higher research platform capable of bridging the so-called hard biomedical sciences and the humanities.

Finally, we would like to express our deepest gratitude to Professor Domenico Ribatti, the journal’s editorial board and the Società Italiana di Anatomia e Istologia for kindly accepting our proposal and for the invaluable support they gave us throughout the editorial process. In addition, we would like to thank all the contributors and anonymous reviewers who have made this issue possible.